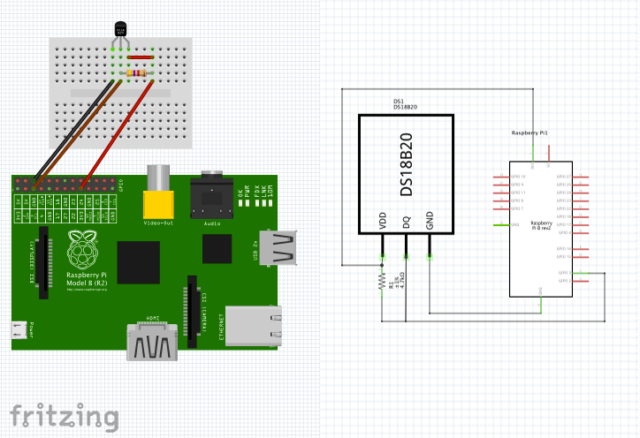 DS18B20 is a temperature sensor which communicates over a 1-Wire bus that by definition requires only one data line for communication with a host controller. I like DS18B20 as compare to other popular low cost temperature sensors for its accuracy and reliability. According to the DS18B20 data sheet, DS18B20 provides a digital Celsius temperature output with an accuracy of +/-0.5°C in the range of -10°C to +85°C.

There are many tutorials on the Internet about interfacing DS18B20 with Raspberry Pi. For most of the Raspberry Pi articles that were published before Jan 2015 (and for some throughout 2015), it is sort of obsoleted or no longer working since Raspberry Pi changed its kernels and firmware in early 2015 to use a Device Tree (DT) to manage some resource allocation and module loading. The detail of Raspberry Pi Device Tree implementation provided further information. The /boot/overlays/README in Raspbian serves as sort of official documentation on how to use the device tree overlay, and here is the part related to 1-wire GPIO

Based on this information, if I'm using GPIO4 as the data line, with a 3-wired Powered configuration, what I would need to add to the end of /boot/config.txt file would be as simple as:

Although based on the /boot/overlays/README, the pullup="on" would only required when the DS18B20 operates in parasite powered mode, however, in my case, it will not working unless I added pullup="on", despite that I'm not configuring my DS18B20 to operate in parasite mode.

Save the /boot/config.txt and reboot the Raspberry Pi.

Login into Raspberry Pi, change to the device directory and list the file in the directory:

Each DS18B20 has a unique serial number which is shown as a 28-xxxxxxxxxxxx device directory. This is the ROM of DS18B20. If more than one DS18B20 are connected, there will be multiple directories named after each DS18B20 serial numbers.

To read the temperature, simple using linux command cat to get and display the data from w1_slave located within the DS18B20 ROM directory:

Any use of IoT (Internet of Things) devices involved Data Acquisition and Data Processing. DS18B20 temperature sensor as one kind of IoT devices is no exception. Most of the articles available online would talked about how to create a program using python to constantly display the temperature reading on screen (In fact, I suspected that many articles simply copy and paste someone's code into their article. What's fun of doing that?). In the world of IoT or sensors, the term of data acquisition means a process of collecting data and storing the data so that further measurement or analysis can be done whenever it is needed. So I'm going to create a data logger that will collect and log the data in a file automatically at regular interval.

First, let create a log file at /var/log/ which is a typical place for all the linux log files located.

Create a shell script called ds18b20.sh at the home directory of the Raspberry Pi:

Save the file and make the shell script that we just created executable:

We can now test it by running the shell script:

We will use the good old Linux utility crontab to carry out the automatic logging.

This will open a terminal editor with a new blank crontab file, or it will open an existing crontab that already have one. If you are first time running the command, it will prompt and asking to pick a text editor, press 2 or Enter for using nano editor.
Scroll down to the end of file and enter this line of script:

So far I'm testing the circuitry and program on a breadboard, but I want to make it permanent so I solder the DS18B28 and the pull-up resistor to 3 cut-shorted jumper wires to make it like a "probe" as shown in the picture below. 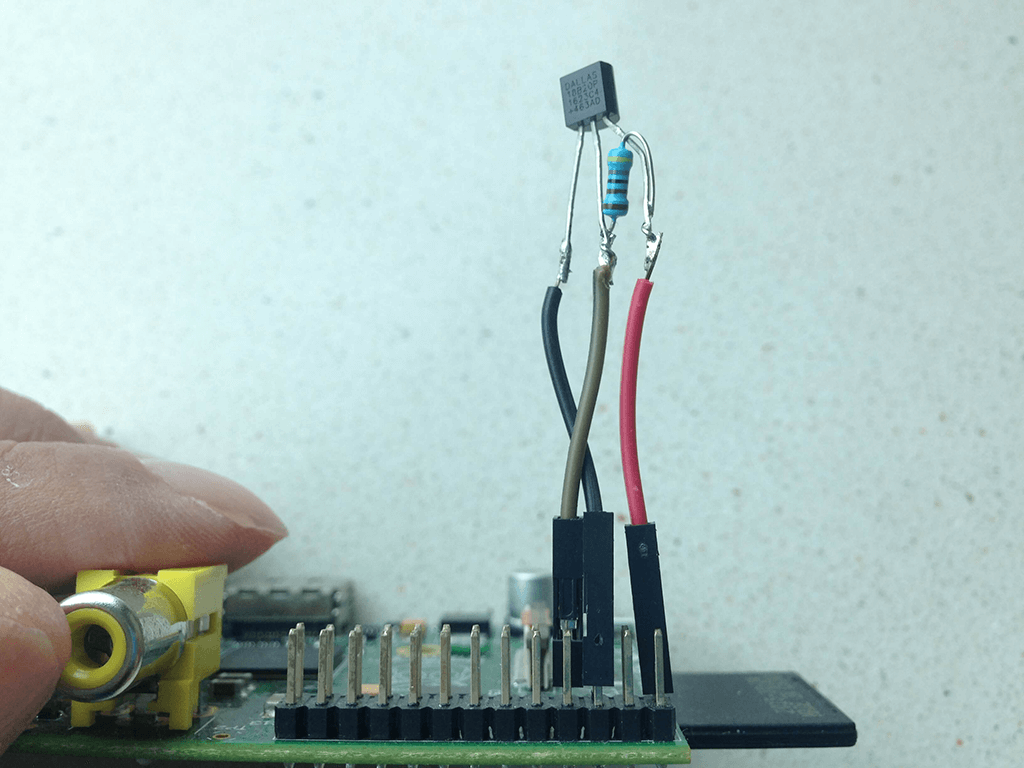 That's all for now. I can take it further, for example, to plot data as a daily, weekly or month temperature chart, or create a RESTful web access API for getting the data, but that'll be another project and another article.