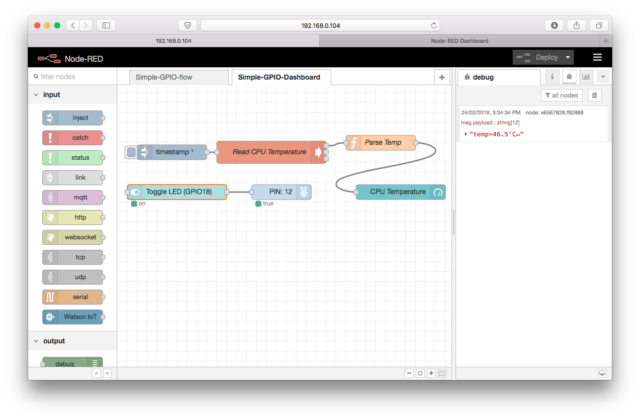 When I published How to control Raspberry Pi GPIO via http web server in April 2018, I never expected it became number 2 of most popular post (see the "Most Popular Posts" sidebar on the right) a year later, my intention back to then was to demonstrate:

On Node-RED home page, it said Node-Red is a "flow-based programming for the internet of things" for wiring together hardware devices, APIs and online services using drag-and-drop pre-defined nodes via a browser-based editor, making it extremely easy for rapidly deploy a web-based application for controlling IoT devices and GPIO.

As this is not a Node-RED tutorial, I like to focus on how we could achieve same result as what I did in "How to control Raspberry Pi GPIO via http web server" using Node-RED.

The python script  read Raspberry Pi's GPU temperature by executing a linux command, it also turn on and off an LED that connect to GPIO18 (Raspberry Pi header physical pin 12). I will implement the same logic as the simple_gpio.py using Node-RED to achieve the same outcome for controlling the GPIO.

What you see on the browser is Node-RED editor, you will see node palette on the left that consists of many pre-defined nodes by category, and info(the one with 'i' icon)/debug(the one with bug icon) side bar on the right.  In the center is the canvas where we could create our flow.

We are done with the "programming" for displaying GPU temperature. Click on the debug icon on the right hand side sidebar, and click on the red Deploy button on the upper right corner of the browser. You should see the msg.payload output from the  "Debug" node.

We will use two "inject" nodes to turn on and turn off LED.

Click on Deploy to run the flow. Click on the button on the left of each "inject" node will generate either 1 or 0 which will set the GPIO18 correspondently to turn on and off the LED.

Although the node-RED flow that we created did achieved the result, but it is an editor page, it is not really a web page where user can use. Won't it be better to have a graphical UI like the one shown below? sure, let's do it.

But if you are running node-RED manually as we described in this article, you can ignore this restart command. Now let's create our dashboard.

You will noticed that there is an newly installed "Dashboard" category on the node palette, these are the UI widgets can be displayed on the Dashboard. First, let's create a new flow by clicking on the + icon on the right side of the flow tab.

As you may noticed from the previous example, the "exec" node return a string like temp:41.5'C as msg.payload. However the "gauge" is expecting a msg.value to be used as the temperature display for the gauge, not a string. So we will need to do some parsing between the "exec" node and the "gauge" display.  We can do that with a "function" node, the "function" allows us to write a JavaScript function to parse the string and return the temperature data as msg.value for the gauge to consume.

Now we can insert the "function" node between the "wire" node and the "gauge" node and wire them up.